Dragon King pays homage to the renowned military leader, Oda Nobunaga of the Sengoku period in the Tenka Fubu Katana which was his motto “the nation under one sword.” 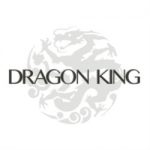 Most prominent on the tsuba (guard) features the kabuto of Oda Nobunaga and on the fuchi-kashira (pommel) the kabuto of his most bitter rival, Takeda Shingen. The fuchi (collar) bears a war fan and battle flag to commemorate his victory in 1560 at Dengakuhazama where he raised his battle flags over the rise of a hill to fool Imagawa’s forces to think he was encamped there, while he and a handful of men snuck around for a sneak attack which afterward changed the course of Japan’s history.

Oda Nobunaga’s passion for warfare to bring about a unified Japan was only matched by his love for poetry and tea ceremony which are memorialized by the silver menuki (handle ornaments). The red lacquered saya holds the true symbol of Oda Nobunaga’s power, a 28 ½” forged steel blade, and symbolizes the blood that was shed to achieve his ambitions. The saya is adorned with a buffalo horn kurikata (knob) and kojiri (cap) and brown and gold sageo (cord) which unifies the piece to the brown tsuka-ito (handle wrap) over white same (ray skin).

A must have for collectors but very much a functional piece, one especially built well enough that Oda Nobunaga himslef would be proud to carry.

Specs will vary slightly
from piece to piece.

The time has come for legends to arise once more.
If you listen hard enough, far off to the east you will hear the rumbling sound of fire and forges churning. If you look hard into the distance, you will see the glow of steel and billows of smoke. None will be able to compare to the grandeur of the Dragon King and it’s come to take the throne. Hail to the king!

The Dragon is back. Hailing from Dalian, China, the master artisans of Dragon King are setting a new standard in the sword market. Collectible, functional and highly desirable their swords and canes blend art, symbolism and heritage without sacrificing their original intent.

The famed artisans of Dalian have returned to show to the sword world what quality, craftsmanship and ingenuity can produce under the superlative leadership of a true avant-gardist. By the guidance of master designer, Frenchie Jin, the next generation of cutlery enthusiasts will taste the steel of the fabled golden age of swords.

There are no reviews yet.